How to invest in Cardano with a Cardano IRA

Cardano IRAs have many advantages, including tax-saving benefits, 24/7 trading, and diversification.

If you’re interested in the most cutting-edge cryptocurrencies, then you may have heard of Cardano. It’s a proof-of-stake (PoS) blockchain launched in 2017 that is a third-generation cryptocurrency. Cardano is designed to improve where the Bitcoin and Ethereum networks leave off, using what is known as the Ouroboros protocol, which is a proof-of-stake (PoS) model for creating new coins. This advanced blockchain system is one of many reasons why people invest in Cardano with a cryptocurrency IRA.

Cardano’s protocols seek to outperform other cryptocurrencies on scalability, speed, and energy consumption, in theory creating a more efficient blockchain than its two larger predecessors and boasting low fees. It is a tall order but one that the Cardano team is inching closer to with each update. These are just a couple of reasons why you might want to invest in Cardano.

Cardano is the brainchild of Charles Hoskinson, one of the co-founders of the popular and trusted Ethereum network. This explains why there are some similarities between these two blockchains, including Cardano’s pursuit to become the next-generation smart contract platform, which is where Ethereum shines. Cardano has earned the nickname as the Japanese Ethereum, considering the lion’s share of the participants in Cardano’s crowdsale were domiciled in Japan.

The Cardano cryptocurrency, known as ADA, is the native coin to the project, similar to how Ether is used on the Ethereum network. If ADA sounds familiar, that is because the cryptocurrency is named after Ada Lovelace, a mathematician from the 1800s and the world’s maiden computer programmer. ADA has consistently maintained its ranking as one of the top 10 cryptocurrencies based on market capitalization. Many of the most popular cryptocurrencies can be bought with a cryptocurrency IRA.

The Basics of Cardano

The main purpose of Cardano is to establish a financial system for people who are left out of traditional financial services, also known as the unbanked. It is designed to facilitate peer-to-peer payments, but that’s just half of it. Cardano also has the launch of smart contracts on its roadmap, a widely anticipated event planned for September 2021. Having updates in the pipeline could serve as a potential incentive to have a Cardano IRA, given the long-term nature of retirement investing. ADA has a maximum supply of 45 billion tokens, because of which hit is considered a deflationary asset, similar to Bitcoin. This characteristic is enough for some investors to want to buy Cardano.

Cardano’s PoS model is secure and facilitates the recording of transactions, which is necessary given the decentralized nature of the blockchain. As the name suggests, a proof-of-stake system gives the network ADA token holders a “stake” in the mining process. The more tokens stakers hold, the more opportunity they have to participate in the network by mining more coins.

One of the key features of proof-of-stake is its energy efficiency in comparison to proof-of-work (PoW), the models that the Bitcoin and Ethereum networks use (though Ethereum is transitioning to PoS). Cardano’s PoS system is said to consume only a fraction of the energy that Bitcoin and Ethereum use.

For example, Bitcoin’s annual energy consumption has been compared to that of the entire country of the Netherlands, while Ethereum’s has been likened to the carbon footprint of Portugal. Cardano through Ouroboros thanks to its compatibility with Raspberry Pi, boasts “four million times the energy efficiency” of competing blockchains, Bitcoin and Ethereum.

To go into more details, Cardano uses a consensus algorithm called Ouroboros, which is what makes its PoS model more sustainable while still ensuring the securing of the network. With the one-two punch of PoS and Ouroboros, the Cardano network can continue to scale without bolstering its carbon footprint.

In addition, while Cardano relies on a two-tiered architecture, Ethereum uses a single-layer structure. This has resulted in a clogged Ethereum network at times as well as transactions that move at a snail’s pace and lofty gas fees for completing transactions on the blockchain.

In March 2021, Cardano underwent a hard fork known as Mary, which represented a major change in the code. Cardano is one of many blockchains that have undergone hard forks, including Bitcoin, the result of which led to the emergence of Bitcoin Cash.

What the hard fork accomplished is tied to the upcoming capability for smart contracts, as it will allow for the creation of other digital assets on the Cardano blockchain. These tokens can then be used to participate in some of the hottest trends in the cryptocurrency industry, including the creation of non-fungible tokens, or NFTs, that are energy efficient. With many use cases, strengths, and upgrades in the future, there is no shortage of reasons why people invest in Cardano with a tax-advantaged cryptocurrency retirement account.

Cardano vs. Bitcoin and Ethereum

Cardano is often compared to Bitcoin and Ethereum, considering those are the two blockchain networks that it seeks to outperform. Early on, Cardano boasted an extremely high transaction per second (TPS) rate. In 2017, when the project first launched, it could handle 257 TPS. By way of comparison, the Bitcoin network’s TPS is less than 5 while Ethereum’s is as high as 30, though that is expected to increase with the transition to Ethereum 2.0, which is powered by proof-of-stake.

Cardano’s parent company, Input Output, is in the process of building Hydra, which is the project’s second-layer scaling solution. Hydra is expected to bolster Cardano’s capacity to as much as 2 million TPS, which would leapfrog the network ahead of Visa, which can process 65,000 TPS. Investors might want to buy Cardano in anticipation of its increasing scalability and the potential for a rising ADA price.

Both Bitcoin and Ethereum currently use a proof-of-work model, in which miners complete transactions by solving complex equations and receive rewards in BTC and Ether. While Bitcoin relies on miners to create more coins, Cardano relies on ADA stakeholders who get to mine coins commensurate with their holdings of the ADA token. This gives the stakeholders more incentive to invest in and hold ADA for long periods of time. 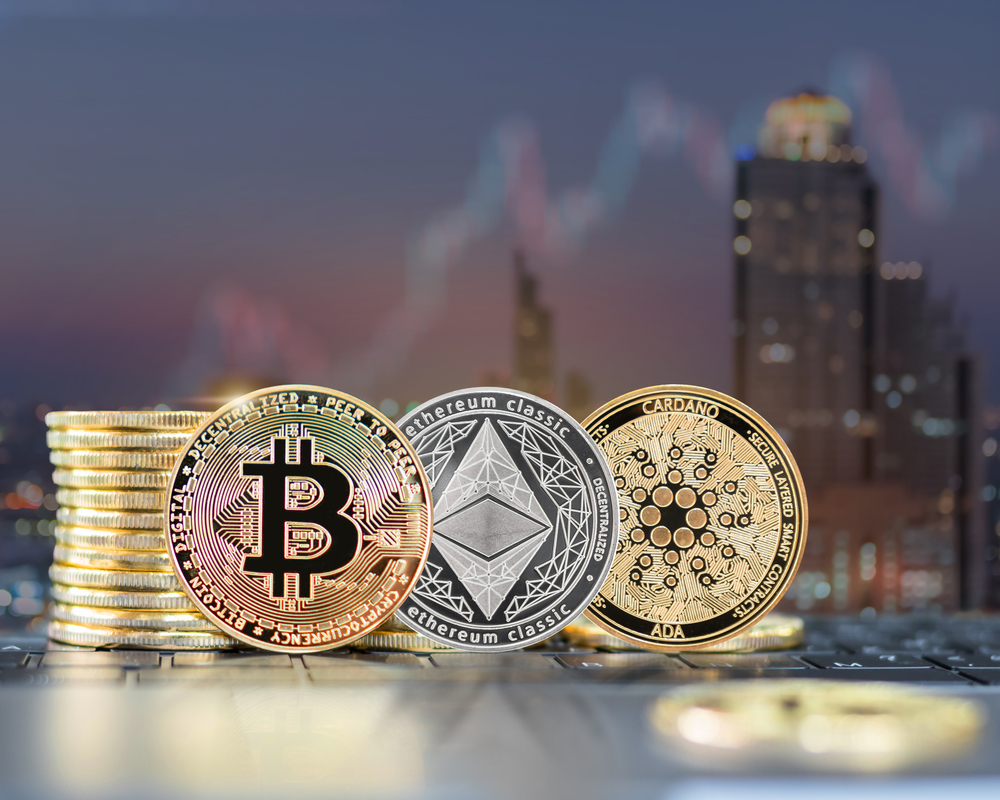 Once Cardano launches smart contracts, it is expected to have fewer differences from its competing network, Ethereum. Where Cardano is ahead is that it already uses a PoW model, which it boasts is a more energy-efficient system, while Ethereum is still transitioning to PoW.

Cardano’s many use cases, beyond being an investible asset on our platform, include the following areas:

While the cryptocurrency markets are unpredictable and there are no guarantees, there is no shortage of ADA price predictions.

With its many use cases and positive price predictions, many investors are looking at Cardano as an investment asset that could yield great returns based on its use cases. Possibly the greatest way to invest in Cardano is with a tax-advantaged Cardano retirement account on our platform.

Why should I Invest in Cardano with Bitcoin IRA?

We’ve outlined compelling reasons why you might want to buy Cardano, largely due to its powerful network and vast capabilities. Cardano’s price went from 3 cents in January of 2020 up to $2.30 in May of 2021. If history repeats itself, it could go up more. There are equally good reasons to invest in Cardano within a cryptocurrency IRA through our state-of-the-art platform. Similar to Cardano and PoS, our platform is an early mover in the cryptocurrency retirement space as the first crypto retirement platform created.

Since launching, our platform has been used by more than 100,000 users who can easily trade cryptocurrencies around the clock, including buying, selling, or swapping assets. We’ve also earned more than 2,500 5-star reviews from happy users. A major reason investors create cryptocurrency retirement accounts with us is that users can earn up to 6%* interest via IRA Earn, where you let your retirement work for you with monthly interest distributions.

Cryptocurrencies on our platform are stored in multi-signature cold storage provided by BitGo, one of the leaders in cryptocurrency protection industry. BitGo’s world-class security and storage also provides our users with $100 million in custody insurance.

How to Buy Cardano with an IRA Today

It’s no secret that Cardano could help revolutionize the way people think of money and finances. If you are ready to start investing in Cardano with substantial tax advantages, then our cryptocurrency retirement platform can help you get started. The first step is to create an account. The second step is to fund your account via a rollover from your existing retirement account or transfer money from your bank. And the final step is to start trading!