Gartner’s Hype Cycle Proves Bitcoin is Not in a Bubble

Bitcoin’s recent price surge has many investors wondering if the cryptocurrency is in a bubble period. Could a crash be imminent, or is bitcoin on its way to widespread adoption? While media outlets portray bitcoin as an overhyped technology ready to collapse, research shows a different set of factors at work. Bitcoin is gathering speed and traction across all industry sectors. It’s well past the bubble phase, rising into a phase of increasing growth — a period the Gartner Hype Cycle calls the Slope of Enlightenment.

What is the Gartner Hype Cycle?

The Gartner Hype Cycle is a research methodology that predicts how a technology evolves over time. Businesses use it to determine when an emerging technology will become commercially viable and sustainable over the long term. The cycle consists of five phases:

Emerging technologies begin with a breakthrough that triggers development (1). Next, they enter a bubble period in which publicity creates overinflated expectations (2). As the technology fails to live up to the hype, it falls into the Trough of Disillusionment (3). Less committed investors and producers fail out of the sector, while others persist. The technology improves and becomes better understood. More applications emerge and some companies begin to adopt the technology (4). Successful cases prove the technology’s relevance and viability, resulting in mainstream adoption (5). 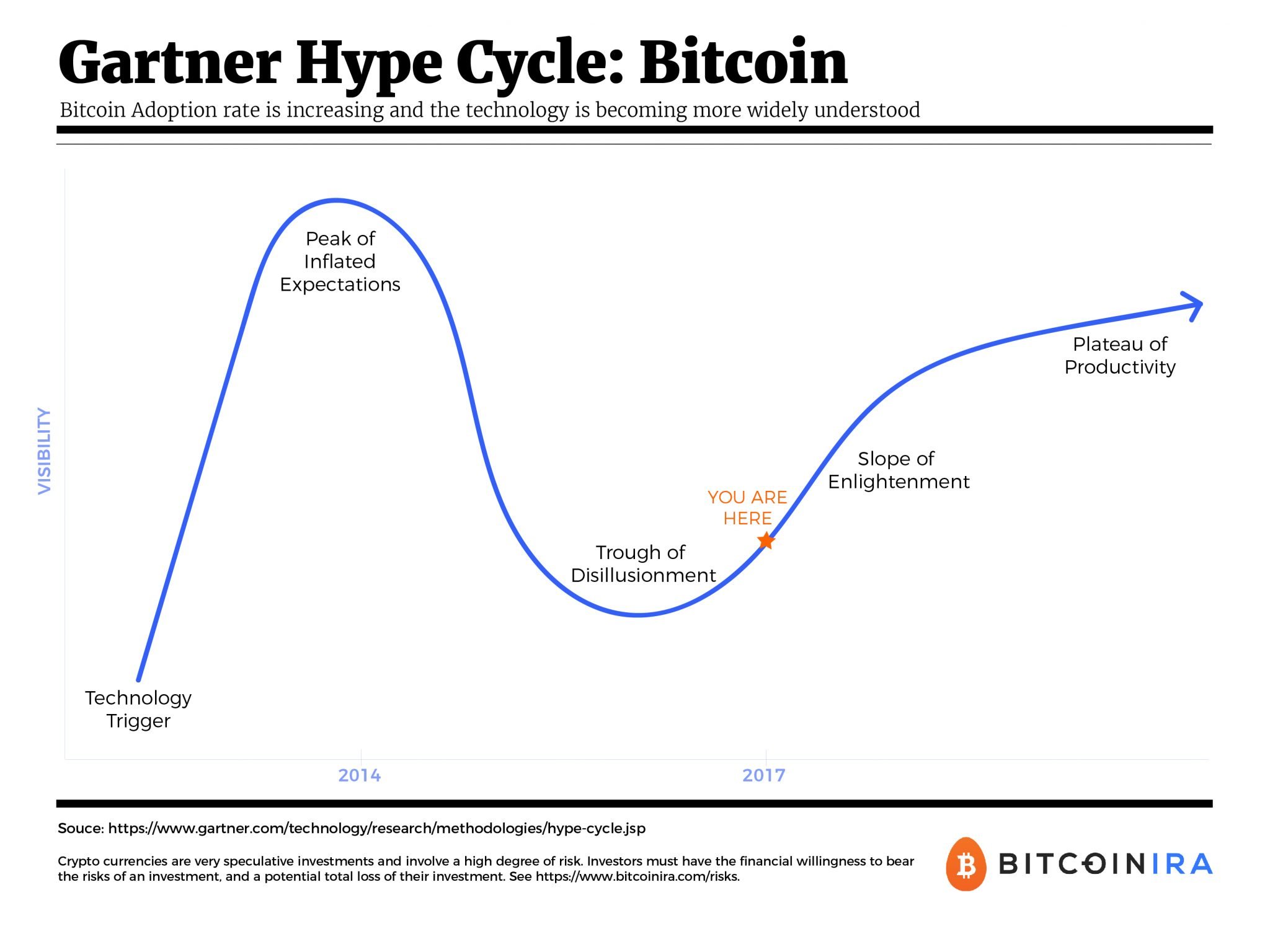 Understanding bitcoin’s place in the Gartner Hype Cycle is important for investors and businesses alike. The Gartner methodology provides a strategic tool that lets us peer into cryptocurrency’s past and see what’s coming next.

Evidence indicates that bitcoin has passed the dangerous phase 2 bubble and is well into phase 4, the Slope of Enlightenment. Gartner defines this phase as follows:

This is an accurate description of bitcoin’s current state. We’ve seen businesses across every industry sector dipping into bitcoin as they begin to realize its benefits. Blockchain technology is improving and becoming increasingly refined. Finally, while some companies remain skeptical, an increasing number are investing in blockchain-based technologies.

Bitcoin’s impact on industry is growing as more companies adopt it as a payment method and integrate blockchain into business processes. Hundreds of thousands of retailers in Japan have already announced bitcoin acceptance. Major global brands now accept bitcoin as a form of payment for their services or goods. Investors are choosing bitcoin as a long-term value store and retirement investment. CME Group Inc. has even announced a bitcoin-based futures contract.

Meanwhile, enterprise applications of blockchain technology are reshaping businesses. Global shipper Maersk recently tested a blockchain-based solution for storing shipping data and reducing costs. Walmart has teamed up with IBM to explore how blockchain can improve food supply chains and safety. Even central banks, previously skeptical of bitcoin, are beginning to realize how they can use its technology to streamline their operations.

Bitcoin and its core technology already has foundational support among major corporations, and blockchain adoption is well under way. To put it in Gartner Hype Cycle terms, we’re at the stage where “More instances of how the technology can benefit the enterprise start to crystallize and become more widely understood.”

Gartner’s Slope of Enlightenment predicts a refinement of the original technology in conjunction with its increasing prevalence. We’re seeing this as well. Bitcoin’s developers constantly update the cryptocurrency to optimize its performance, including adjustments for better scalability. These adjustments offer more highly developed iterations of bitcoin and its underlying technology.

The distributed ledger technology (DLT) that powers bitcoin is also evolving. For example, Hewlett Packard Enterprise is offering large-scale blockchain implementation for enterprises to transact with each other – a project they’re referring to as “blockchain 2.0.” This blockchain is built from the Corda ledger, developed by financial consortium R3. Over 80 banks and financial organizations contributed to R3’s development of the new distributed ledger system.

DLTs and software updates show how the ecosystem has changed since bitcoin’s inception. Each transformation brings improvements, which in turn increase bitcoin’s viability. The second- and third-generation technologies we’re seeing today prove that bitcoin is built on a solid foundation that supports continued growth.

In financial markets, a bubble is defined as a price surge driven solely by market exuberance with no support from fundamentals. That’s not the case with bitcoin in 2017. On the contrary: Bitcoin’s price surge has robust fundamental support in the form of widespread industry adoption and technological development. Blockchain technology is becoming an integral part of business operations. Bitcoin is becoming widely accepted as a payment method and a legitimate investment asset. Furthermore, bitcoin itself is improving through rigorous software updates.

These traits position bitcoin squarely in Phase 4 of the Gartner Hype Cycle. As bitcoin ascends the Slope of Enlightenment, Gartner predicts increasing success until a breaking point at which mainstream adoption takes off. This could happen soon. Bitcoin’s market relevance has already been clearly demonstrated. It’s only a matter of time before bitcoin reaches a Phase 5 level of full integration and sustained productivity.

Ready to invest in Bitcoin? Get started here with Bitcoin IRA.