How Trump’s Tax Plan Could Boost the Price of Bitcoin

On September 27, the Trump administration released its new tax reform plan that would reduce income tax rates for both individuals and corporations. The Unified Tax Reform Framework aims to reduce the tax burden on American businesses and families and, thereby, boost economic growth by enabling businesses to create more jobs and by giving individuals more personal spending power.

The key points of the proposed tax reform are as follows:

Since its publication, President Trump’s proposed tax reform has caused heated discussions among lawmakers, business owners, and Wall Street and the potential benefits and drawbacks of the reform are still being analyzed.

However, the potential effect that the new tax reform will have on the price of bitcoin is something that the media has not yet touch on.

The New Tax Reform Could Indirectly Boost the Price of Bitcoin

While the new tax reform may simplify the U.S. taxation system and would benefit corporations and individuals in specific tax brackets, the new reform would likely also add trillions of dollar of debt over the next decade.

For this reason, President Trump’s new tax reform could bode well for the performance of the price of bitcoin as an increase in government debt will weaken the US dollar and the performance of the stock market in the long-run. Investors will, therefore, likely look for alternative investments such as bitcoin to place their funds into, which could give the digital currency a substantial boost.

$ 7 Trillion in New Debt Will Weaken the US Dollar

Currently, the national debt stands at over $20 trillion and should the new tax reform be implemented in its current state, this figure could balloon to as much as $27 trillion as up to $7 trillion would be lost in tax revenue according to CRFB estimates. 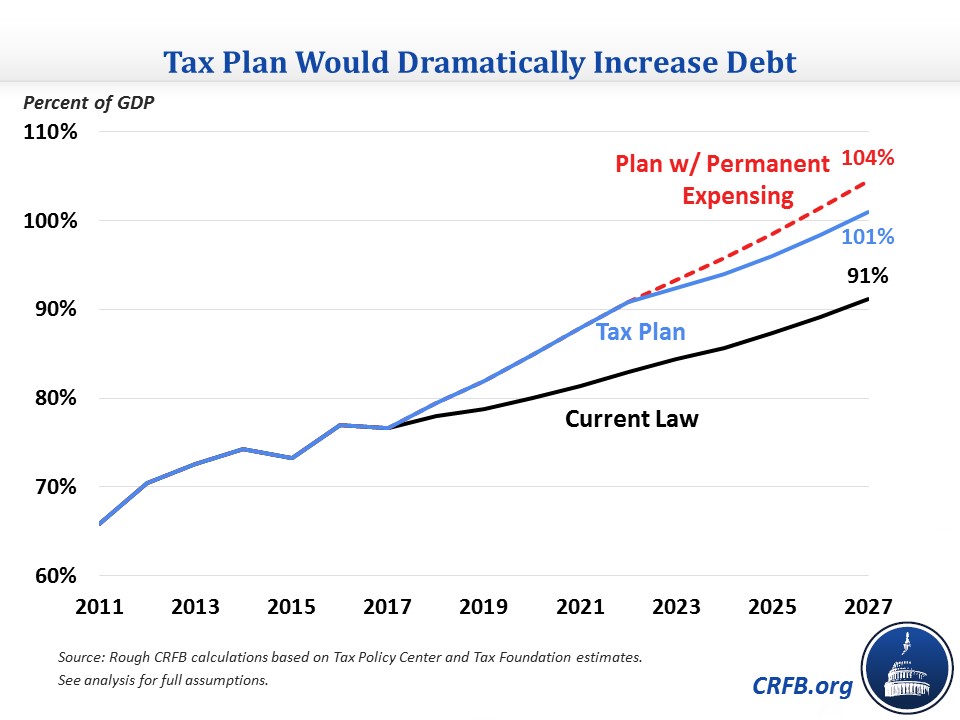 Economic theory tells us that an increase in a country’s debt to excessive levels will weaken a country’s currency. The closer a country comes to defaulting on its government debt payments, the more likely its sovereign currency will lose value. Therefore, should the new tax reform pass and the national debt continue to balloon, the U.S. will most likely witness the value of the dollar plunging against other major currencies.

In that case, it is likely that more investors will diversify away from the dollar and into other currencies, including digital currencies such as bitcoin as a hedge.

Stocks Could Tumble and Lead to Greater Alternative Asset Investments

An increase in national debt levels would also destabilize financial markets and weigh on the prices of stocks as we were able to witness in 2011 when the US was forced to raise its debt ceiling not to end up defaulting on its national debt. In the two weeks that encompassed the decision to increase the national debt ceiling, the stock market crashed by over 16 percent as investors priced in a potential slowdown in future economic growth.

According to The Heritage Foundation, “[…] advanced economies like the United States are at risk of significant and prolonged reductions in economic growth when public debt reaches levels of 90 percent of GDP. High public debt threatens to drive interest rates up, to crowd out private investment, and to raise price inflation,” while a World Bank study in 2010 concluded that if a developed economy’s debt-to-GDP ratio exceeds 77 percent for an extended time period it will slow the country’s economic growth. The federal debt-to-GDP ratio in the U.S. is currently at 103 percent according to the Federal Reserve Bank of St. Louis.

While cutting corporate tax rates may give stocks an initial boost, much of that has already been priced into the market when President Trump won the elections in 2016 as his tax reform plans were a key part of his political agenda during his campaign. However, if a tax-relief driven short-term boost in corporate after-tax earnings will lead to an increase in national debt, the stock market will not benefit from the corporate tax cuts for long.

A further increase in the level of the national debt will weigh on the country’s economic growth prospects, which, in turn, will negatively affect the value of stocks in the coming years.

In such a scenario, it is very conceivable that investors will look for other asset classes to invest in for the purpose of hedging as well as in search for strong returns. That is where bitcoin and other digital currencies can offer an excellent investment opportunity due to their uncorrelated nature and high returns potential. Furthermore, with the increasing interest by institutional investors in the cryptocurrency market, it is not unlikely that a slowdown in the stock market could lead to a rally in bitcoin and other digital currencies.

Whether you agree or disagree with the Trump administration’s proposed tax reform, as an investor you should consider the implications the tax reform may have on the value of the dollar, stocks and other financial assets. Moreover, you should ask yourself whether more individuals and fund managers will diversify into bitcoin as a way to hedge their portfolios using an uncorrelated asset with high returns potential.

If you believe that bitcoin could flourish as an alternative asset under the new tax regime, then you should buy bitcoin before the bill is passed.