More Millennials are Buying Bitcoin to Save For Retirement

The State of Finances for Millennials

According to a new report by the Federal Reserve Bank of St. Louis, millennials born in the 1980’s are poorer than every generation before them. As of 2016, people born in this decade were 34% poorer than they would be had the financial crisis not occurred. This is a dramatic decline compared to those born in the ’70s, who had wealth levels 18% less what they would have had without the recession, and for those in the ’60s, which were down by 11%.

The recession undoubtedly had a dramatic impact on millennials, many of whom entered the job market around the height of the 2008 financial crisis. While the economy in the past decade has since improved, the cost of living has continued to dramatically rise, making it difficult for everyone who had a rough start entering the workforce to ever fully gain solid financial footing.

Perhaps it’s not surprising, then, that in the midst of all of the financial pressures that millennials face, retirement planning has fallen by wayside. Research from the latest installment of the National Institute of Retirement Security shows that 66.2 percent of working millennials haven’t saved up any money for retirement.

But the situation is not hopeless. We live in the digital era where everything is possible thanks to technology, and many millennials looking to save for retirement are considering other options, particularly: cryptocurrency. 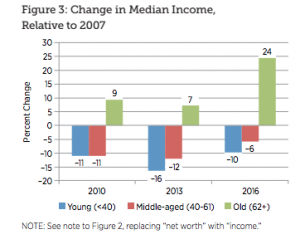 According to a recent study from Finder.com, millennials had a 17% cryptocurrency ownership rate out of the 2,001 American adults surveyed (this was significantly higher than Gen X, which had a 9% rate, and Baby Boomers, which was a bit over 2%).

Why do millennials love crypto? Simon Yu, CEO of blockchain startup StormX, had some ideas. “Millennials are particularly open to embracing new technology in order to create opportunities for themselves– and blockchain, the tech behind crypto, is no different. As masters of the side hustle and challengers of the traditional 9-5 working lives of previous generations, millennials are welcoming blockchain with open arms,” Yu said.

And for a generation that experienced the damage of the 2008 financial crisis, the idea of diversifying funds with assets that are not tied to the stock market, such as Bitcoin or gold, resonates more than ever.

“As a millennial, I personally put much greater faith in scarce digital assets that are determined by math and auditable code, rather than a group of bankers at the Federal Reserve,” said Managing Partner at Ausum Ventures Jeremy Gardner, expressing an opinion that many from his generation share.

Meanwhile, Parul Gujral, co-founder and CEO of Snowball, and also a millennial, discusses how Bitcoin’s massive earning potential incentivized him to diversify his retirement portfolio with crypto. “Sure, cryptocurrency investments are liquid and risky. But if my investment could snowball effect 1000x, why would I not invest at least a minority portion of my retirement into crypto?” Gajral said.

Bitcoin in Your IRA

BitcoinIRA.com is the world’s first and largest cryptocurrency IRA platform that allows customers to purchase Bitcoin and other cryptocurrencies for their retirement accounts. With over $300 million investments processed in the last 12 months and 600+ 5-star customer reviews, our impressive track record speaks for itself. To learn more about diversifying your retirement portfolio with Bitcoin or other cryptocurrencies, give one of our IRA specialists a call today at 877-936-7175.