Earlier this spring, hundreds of University of California, Berkeley students were turned away when they attempted to register for popular new crypto courses.

Dawn Song, a computer science professor at University of California, Berkeley, co-instructed a class during spring semester of 2018 called “Blockchain, Cryptoeconomics, and the Future of Technology, Business and Law.” A collaboration between the school’s computer science, business, and law schools, it admitted students from each school in equal amounts, but that still wasn’t enough to satisfy demand.

Song says the course was “hugely popular,” and notes the school was forced to turn down more than 200 students for a classroom that could only seat seventy.

It’s a scene playing out in dozens of universities across the United States as more and more campuses begin to meet a rising demand for an education in blockchain.

A study conducted for Coinbase by research firm Qriously found that, in a survey of 675 students, nearly 10% had already taken a cryptocurrency course.

A potential reason for the strong enthusiasm about blockchain in education is its potential, already being seen in its impact across financial markets and other aspects of society.

“[Blockchain] can have really profound and broad-scale impacts on society in many different industries,” says Song. “Blockchain combines theory and practice and can lead to fundamental breakthroughs in many research areas,” she said.

A quarter of all students said they would definitely or probably take a course focused on cryptocurrency or blockchain.

There are now dozens of blockchain and crypto courses offered nationwide, with new ones being added all the time. Johns Hopkins University offers a business course in which students study “the potential benefits and weaknesses of [blockchain’s] fundamental structure as applied to businesses and organizations.” At Princeton, students are offered an information-security class focused on secure computing systems, cryptocurrencies, blockchain, and related economics, ethics, and legal issues. Cornell offers “Anthropology of Money” and “Introduction to Blockchains, Cryptocurrencies, and Smart Contracts,” which covers the cryptocurrency bitcoin and “the technological landscape it has inspired and catalyzed,” according to the class catalog. 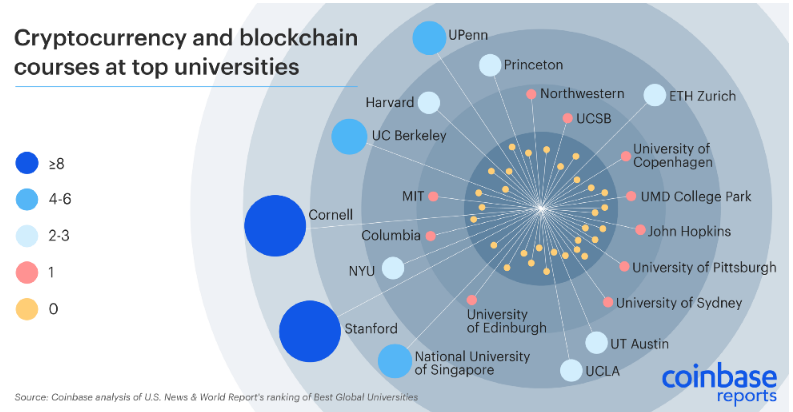 To better prepare future job seekers, universities are expanding to offer even more classes in the future. Stanford launched its Center for Blockchain Research to bring together faculty and students across multiple school departments to work on various aspects of blockchain and cryptocurrencies.

And it looks like the focus on these classes pays more than just financial dividends. Professor of computer science and electrical engineering at Stanford University and co-director of the center Dan Boneh says that he finds himself walking away with three new research ideas every time he talks with a new team in the group.  “There are new technical questions being raised by blockchain projects that we would not work on otherwise,” says Boneh.

Campbell Harvey, a Duke professor of international business adds “You need to prepare your students for the future…blockchain is not going away.”