Here’s How Bitcoin Can Help The Economic Recovery from Coronavirus

The coronavirus (COVID-19) pandemic has rattled the global economy. In March 2020 alone, over ten million Americans filed for unemployment, and global stocks saw a downturn of at least 25%. Along with the immediate and devastating impacts, the economic recovery to follow will be lengthy, potentially lasting years.  Even as economies slowly reopen, there will be a lasting impact on consumer behavior until a vaccine is widely available, pointing to a slow road ahead.

This leaves consumers in a difficult position during this recovery process, unsure of where their money is safest while the economy crawls back toward its pre-crisis health. Widespread recovery efforts taking place around the globe will have an impact, and adoption of cryptocurrency like Bitcoin is a small piece of that puzzle. Governments will continue scrambling to keep their economies from collapsing as savvy consumers look for ways to shield their investments from the long-term impact.

Bitcoin Is Sounder Money Than US Dollars

Bitcoin’s importance in the recovery is marked by its stark contrast to the U.S. dollar in its structure. Bitcoin was created as a decentralized currency, built to withstand an economic crisis and hold value. Additionally, its ideation in 2008 was a response to the Great Recession, as investors became wary of putting too much trust in the stock market.

With a cap of 21 million bitcoins to ever be in circulation, it has a significant advantage over traditional currency, which is consistently printing new bills. Additionally, Bitcoin’s rate of supply was cut in half in 2020, lowering the rate of inflation to 1.8%. Meanwhile, large coronavirus stimulus packages will continue to increase inflation of the U.S. dollar.

Because of this clear difference in how these monetary assets operate, it’s no surprise that a global crisis does not have a uniform effect. While most asset classes took a dive in March of 2020, Bitcoin’s recovery was rather quick compared to the S&P 500. By the end of April, Bitcoin was trading above $8,000 and topped both the dollar and stocks on current-year gains. 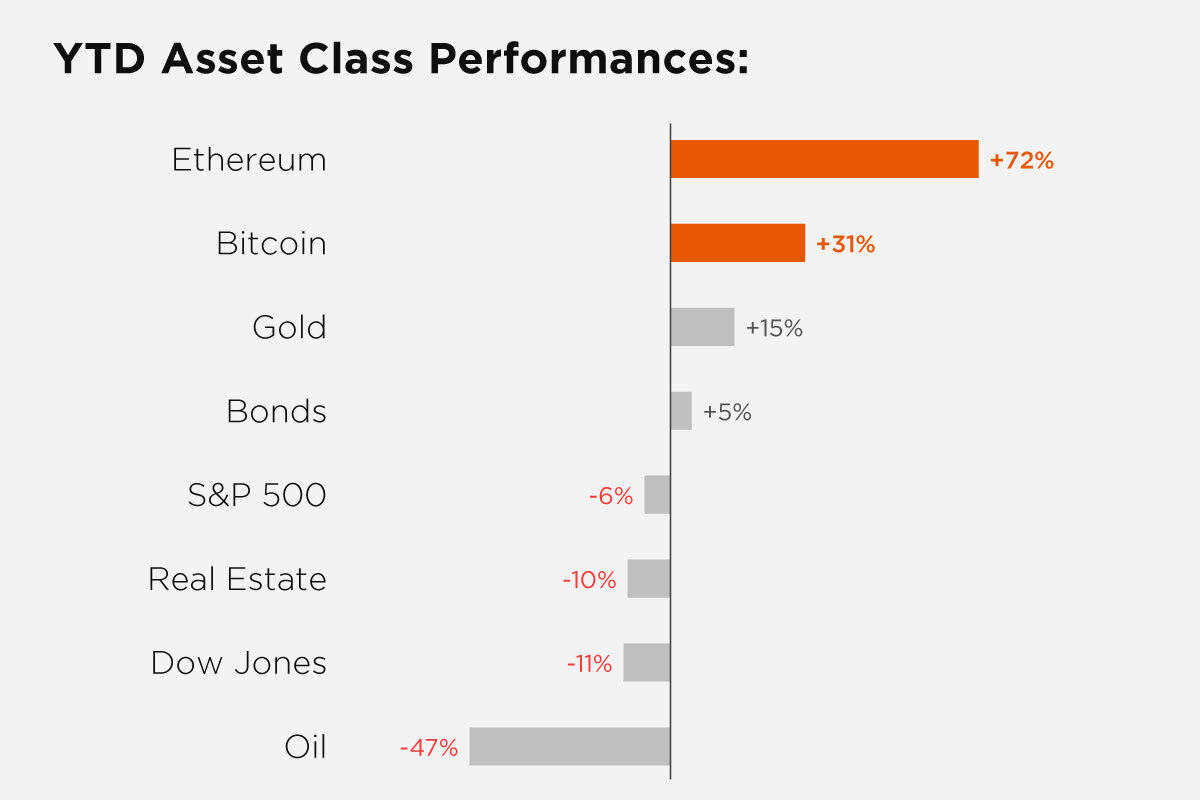 Source: MarketWatch (as of May 30)

Additionally, Bitcoin IRA’s internal data has shown record transaction volume in 2020—a trend which has continued throughout the crisis. While investors are selling off other assets, they’re looking at buying into cryptocurrency. 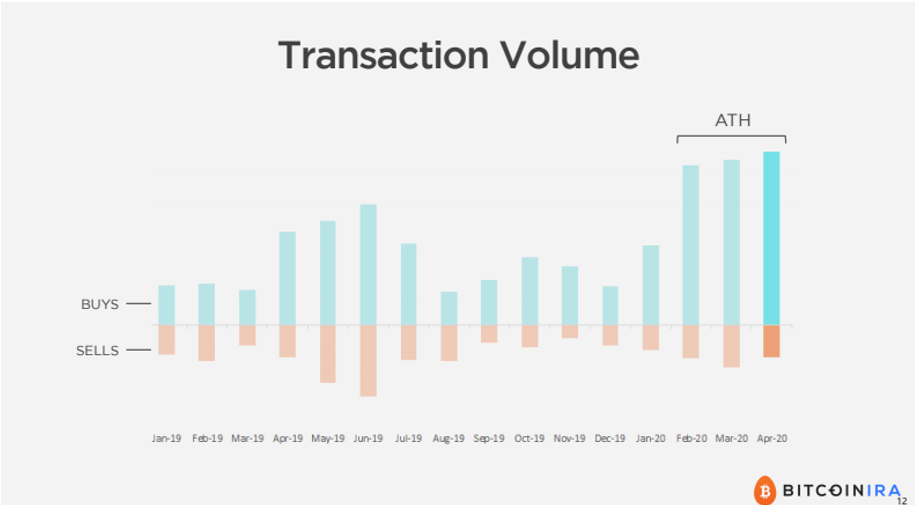 Additionally, it’s important to focus on long-term trends as well. This recovery cannot be analyzed with only a few months of data, as it will be ongoing for years to come. After all, devaluation of money does not happen overnight, but over the course of a long period of time. Looking below at decades of economic crises, the Federal Reserve’s money stock, as measured by M2, has more than doubled since 2008.

Meanwhile, Bitcoin was designed to hedge against the unbridled printing of money with a steady rate of supply that is cut on half every four years, in an event known as the “halving.” With this regular schedule independent of the stock market or the economy, as well as a total cap of 21 million bitcoins, the supply chart looks much different, and it is predictable for decades to come:

Based on the available long-term data, investors can see the night and day differences in their options—and all over the world, consumers are turning to decentralized cryptocurrency with growing distrust of centralized government currency and large financial institutions.

In fact, demand is getting so high that countries who previously outlawed or banned cryptocurrency trading are changing their tunes. Thanks to new Anti-Money Laundering framework, governments are more equipped to properly handle cryptocurrency. Among the recent shifts, France, Germany, India, Zimbabwe, and South Korea have all made moves toward accepting cryptocurrency as a legal tender.

With these shifts taking place, Bitcoin and other cryptocurrencies will play a critical role in the economic recovery. With increasing demand and global acceptance, awareness and accessibility to cryptocurrency will increase exponentially. As a result, cryptocurrency becoming more mainstream means that it will no longer be on the outskirts of the conversation; it will likely be a viable, stable, and accessible solution for any investor looking for options outside of the stock market.