The world economy is undergoing a massive shift owing to the development and applications of disruptive technologies. While these technologies are facing heavy skepticism, some are optimistic about their impact.  United States has been doing fine in the aftermath of 2008’s great recession. But most parts of the world are still feeling the sting of the event. To recover from the same, the Central banks are employing monetary policies that might be not desirable. One such policy is negative interest rates. While such policy might set a dangerous precedent for global economy, it gives an opportunity for alternatives to thrive. Negative interest rate might fuel the growth of cryptographically backed open blockchain assets.

Sweden, Japan and Switzerland are among the countries that are currently imposing negative interest rates. Negative interest rates essentially mean charging users to store money in the bank. This is to stimulate borrowing which would help a suffering economy. This becomes reason for central bank to print more money known as ‘Quantitative Easing’. 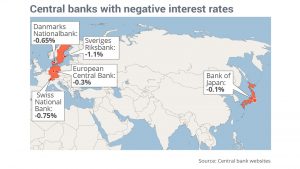 This policy would clearly push people to look for alternatives which can be a service that reflects growth rather than contraction. Holding cash would be more lucrative for people in a negative interest rate environment. But this would be difficult due to security and storage issues. This is where Bitcoin and Blockchain can be a savior.

Role of Bitcoin and Blockchain:

Bitcoin and Blockchain are still in the growing stages and looked up to as much sorted alternatives. Their ability to store money and the probable increase in its value owing to its adoption is what makes them great alternatives for the existing system. For this to be effectively formulated, entrepreneurs must be educated about the importance of Bitcoin and open blockchain. This means promoting it as an engine of economic growth and financial inclusion.

Transparency, combined with tools such as programmable agreements, ranks among the most exciting characteristics of open blockchain assets. As such, these assets are expected to be considered highly impactful to the future of the global economy. With further work, existing long term problems like negative interest rates might be mitigated and economy can be reconstructed around these assets.