(UPDATED 7/26): Today the SEC has rejected an ETF request from the Winklevoss and their Bats BZX Exchange (Gemini Trust). Other proposals are still pending with the SEC including one from the CBOE / SolidX and another from Direxion. The SEC recently postponed a decision on the later until September citing it needed “sufficient time to consider this proposed rule change.”

What is an ETF?

An ETF, or an exchange-traded fund, is a marketable security that tracks an index, a commodity, bonds, or a basket of assets. It is also a means of portfolio diversification and a hedge against risk.

With a Bitcoin ETF, investors won’t be holding actual crypto, but rather a fund that buys crypto, so it has the potential to attract a large number of additional investors to the space.

The price of gold increased following the ETF launch in 2003. And now, with a Bitcoin ETF rumored on the horizon, there is speculation that a similar trend will follow suit. 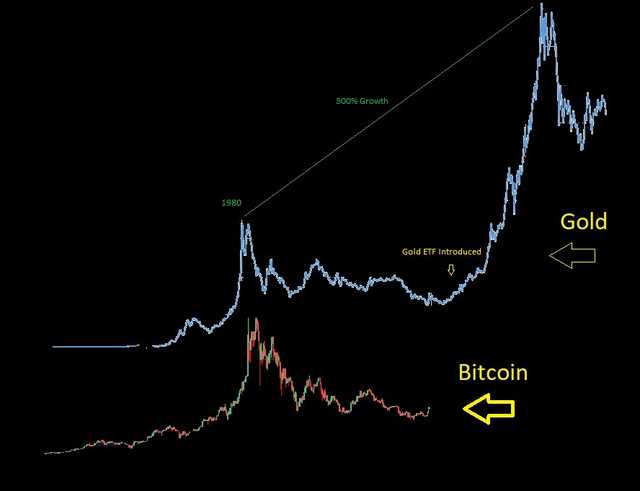 Source: Reddit | Disclaimer: Image is 30 years for gold and 1 year for crypto. For illustrative purposes only.

In late June, the CBOE filed an application with the SEC to open the world’s first Bitcoin Exchange Traded Fund (ETF). According to the proposal, the Bitcoin ETF will be backed by secure holdings of Bitcoin in the VanEck SolidX Bitcoin Trust. The Trust will trade Bitcoin on over-the-counter exchanges both domestically and internationally to maintain liquidity and sufficient reserves, as well as offer a comprehensive insurance plan.

While the SEC is not scheduled to make a decision until August 10, there are several key happenings that indicate the application will likely be accepted. Let’s take a closer look.

The SEC Has Already Said Bitcoin is Not a Security

SEC Director of Corporate Finance William Hinman has already stated this year that both Bitcoin and Ether are currencies, not securities. This means that most federal securities laws will not apply to the two most popular cryptocurrencies out there.

“As with Bitcoin, applying the disclosure regime of the federal securities laws to current transactions in ether would seem to add little value.” Hinman said in June at the Yahoo All Market Summit in San Francisco.

Bitcoin and Ether will therefore not be held to the same stringent regulations as publicly traded stocks by the SEC, which will likely simplify and streamline the application review process.

This decision, combined with the SEC’s decision in late June to propose easing its rules for low-risk ETFs, indicate that Bitcoin ETFs will likely be a crucial addition to the crypto landscape very soon.

Mainstream Financial Institutions Are Getting Involved

David Solomon begins his role as the new CEO of Goldman Sachs in October, and he has already told Bloomberg that they are “clearing some futures around Bitcoin“, and that Goldman Sachs must “evolve it business and adapt to the environment” in relation to cryptocurrencies.

JPMorgan Chase appears equally enthusiastic about the future of cryptocurrencies. While CEO Jamie Dimon had at one point called Bitcoin a fraud, the bank now calls it “the holy grail for owners and investors” and that a Bitcoin ETF “could have a transformational impact on the cryptocurrency.”

“A futures contract is the next logical step in the maturation of the bitcoin market,” Gemini co-founder Cameron Winklevoss said. And given the recent rise in involvement amongst Wall Street institutions, seems that the launch of a Bitcoin ETF will soon be inevitable.

Bitcoin recently hit a two-month high, and many are predicting that the price will reach $10,000 pending the SEC’s approval of the Bitcoin ETf application.

But the imminent decision by the SEC is not the only cause of the recent rise in Bitcoin. Earlier this month, BlackRock, the world’s biggest asset management company, announced that it too would be investing in bitcoin. That caused a huge boom as it shows once again that the mainstream financial industry is finally not only taking cryptocurrency seriously but is expecting big payoffs from it themselves.

The senior market analyst at eToro, a leading trading platform with over 250 million trades, tweeted this morning:

With the combination of the SEC’s recent initiatives, as well as the influx of crypto enthusiasm from mainstream financial institutions, it seems very likely that Bitcoin ETFs will hit the marketplace soon. Stay tuned for the decision on August 10!