The supply cap on Bitcoin is what makes its journey a fascinating one to follow. The speculation surrounding its adoption always contributes to the volatility. But to make sure that we are mindful of the fact that the supply is limited, comes once in every four years the concept of halving the reward for every mined block. This reward, initially set to 50 BTC, fell to 25 BTC in late 2012 and to 12.5 BTC in the last month. While this is expected to affect the prices positively, let’s look into other factors that would be affected:

Effect on the miners:

What keeps the Bitcoin network running is the group of miners who are incentivized for processing the transaction. Currently the incentive is bitcoins released per completion of each block. Since this would reduce, the price has to double else the miners’ earnings would be reduced. This would result in miners leaving the network and leave the control of the network in hands of few. This would centralize the control and put it under the risk of an attack. One major concern is that the miner income has changed drastically. It went from 70 bitcoins a week a year ago to less than 20 a week now. 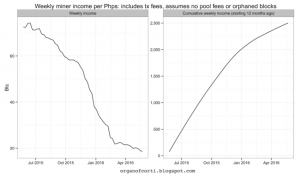 How would halving effect the price:

When this last happened in 2012, there was a significance boost in the prices and proved out to be a good investment. While the price is expected to go up this time too, to what level is still out for speculation.  Most of the analysts are predicting the prize to trade upwards of $600. While their assessments are based on factors such as increased developer activity and transaction volume, influences on Bitcoin’s price will be as unpredictable as Grexit, Chinese capital controls, developer infighting and whatever else fate has in store for this virtual money.