3 Reasons Why Bitcoin Always Bounces Back

Increased regulation in China and Korea has contributed to the recent dip in cryptocurrency prices, but as Chief Executive Officer of Bitbull Capital Joe DiPasquale demonstrated in his recent blog post The Perennial Dip, cryptocurrencies have dipped many times in the past before bouncing back again. If the cyclical data alone does not reassure you, here are three additional reasons that support why cryptocurrencies will inevitably rebound. 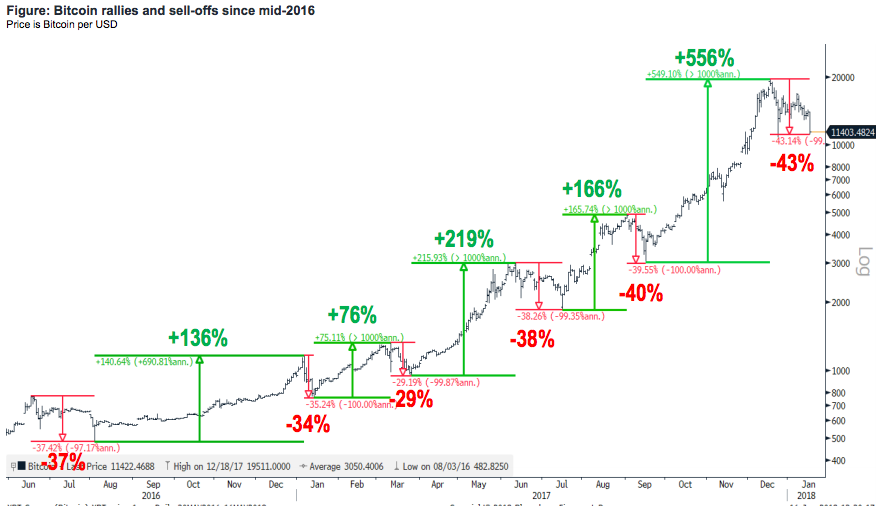 Blockchain Technology is Evolving Faster than Ever

The blockchain, or the highly secure technology which records and verifies transactions on a public, decentralized ledger, has gone through multiple iterations (or generations), cementing its utility, versatility, and value in widespread business application.

While the first generation of blockchain technology focused primarily on verifying Bitcoin transactions, the second-generation iteration has larger ambitions, aiming to transform the way we do business. Ethereum, commonly referred to as “Blockchain 2.0,” is a decentralized platform that runs smart contracts, executing applications as programmed without the risk of downtime, censorship, fraud, and third-party interference. Smart contracts act as the building blocks for decentralized applications, or applications that run on a peer-to-peer network rather than a centralized server, subsequently boosting data security and community.

Now we are already on to the third generation of blockchain technology, which aims to solve some of the problems that have cropped up over the first two iterations surrounding scalability, interoperability, and sustainability.

One initiative that is specifically focused on addressing these issues is the Cardano project. By providing a proof of stake algorithm that uses less computational power than Bitcoin’s blockchain, developing an interoperability strategy to facilitate communication between cryptocurrencies and other blockchains, and implementing a decentralized treasury that allows users of the network to submit improvement ballots in regards to infrastructure and development, Cardano is developing a more sophisticated blockchain than ever before.

As Jeff Schumacher, co-founder and CEO of management consulting firm BCG Digital Ventures said, “Blockchain technology will remain one of the most disruptive technologies we have seen since the internet and third-generation protocols remain the biggest trend we see for 2018.”

A Consistent Antidote to Inflation

Inflation unfortunately is on the rise in many parts of the world. In 2016, Venezuela and Sudan exhibited inflation rates of  475 percent and 476 percent, respectively. “Bitcoin is an effective tool to mitigate the risk of inflation, simply because production will never exceed more than 21 million bitcoins. This quantity will be reached by the year 2140 when the last bitcoin is generated,” Julio Gil-Pulgar writes in his article, “Many are Mulling Over the Idea of Retiring on Bitcoin.”

As cryptocurrencies go mainstream, wealthy investors around the world are intrigued and taking a closer look. But bitcoins are hardly reserved just for the wealthy. In fact, people in many countries are using cryptocurrencies for such day-to-day actions as buying food, sending money to relatives, and purchasing plane tickets.“There are countries today without potable water where everyone has a cell phone,” said Jorge Farias, the chief executive officer of Panama-based digital currency exchange Cryptobuyer. “Anyone who has a smartphone can have a bitcoin account, which is something that couldn’t happen before. So its niche really is the whole world.”

Indeed, bitcoin, removed from the stock market and government regulation, has already proved, and will continue to prove its importance as a reputable alternative currency for countries that face hyperinflation.

The cryptocurrency space is only continuing to generate greater mainstream adoption in both the finance and technology sectors. This is due to a variety of factors. First, there is the emergence of bitcoin in futures markets. The CME and Cboe global markets have already launched Bitcoin futures, while a Nasdaq bitcoin futures launch is scheduled for 2018.

In addition, regulated exchanges such as LedgerX providing oversight, reducing risk, and drawing a wider group of investors to the space.

Simultaneously, major financial institutions seem to be warming up to Bitcoin. Goldman Sachs is planning to launch a trading desk for digital currencies by June 2018. And JP Morgan CEO and notorious bitcoin critic Jamie Dimon recently admitted that he regretted calling Bitcoin a fraud.

And over in the fintech space at Square, bitcoin payments became available on the cash app in November 2017. Last December, the company announced that they would be expanding the offerings to more of its active users. “We believe cryptocurrency can greatly impact the ability of individuals to participate in the global financial system and we are excited to learn more here,” a Square spokesperson said.

If in doubt about the future of digital currencies, look at the data: Bitcoin’s price has always increased substantially after dips greater than 20 percent. Bitcoin’s evolving blockchain technology, hedge against inflation, and mainstream adoption are just a few of the reasons why, despite current market fluctuation, we should remain optimistic about its future.