In 2015, Bitcoin managed to outperform all the asset classes and made a lasting mark on the global markets. With heavy return on investments and high transactional volumes, it has now become a strong contender for portfolio diversification. Throughout the year, the economy cramped with global issues of great apprehension. While most currencies struggled to strengthen against dollar, Bitcoin comfortably gained a strong 40% making it the best performing currency. It is a very strong uptick as Bitcoin won over the second best currency by a margin of 25%. 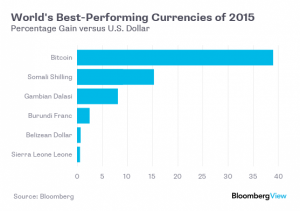 Bitcoin not only performed well in comparison to other currencies but also with major asset classes. It can be treated on par with stocks, bonds, precious metals, or currencies and hence can be considered as an asset class. This idea was popularized by Max Keiser in early 2013. The FinTech blog ‘TheBankwatch’ backed this idea defining why “Bitcoin is an asset class, not a currency.”  Later in May 2015, NYSE launched a Bitcoin Price Index and declared it as an asset class. 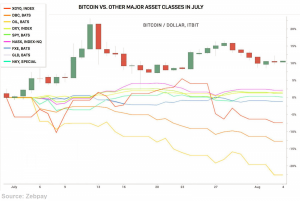 Diversification is the trademark of an exemplary investment portfolio. This traditionally meant keeping a host of bonds, stocks and metals side by side. When one asset takes a hit, the others will compensate for the loss. Bitcoin has very little correlation with any of the asset classes. It portrays completely independent set of characteristics and that is what makes it an ideal tool for diversification.  In 2015, heavy concerns clouded the global markets which made all the asset classes underperform.  Probably having Bitcoin in one’s portfolio would have provided the potential to improve returns for that level of risk.

Traditionally known to be very volatile, Bitcoin has seen some amount of stability in terms of price fluctuation past year. This can be attributed to increase in the trading volumes owing to big market players taking long term positions in Bitcoin. In 2015, the average 30 day volatility for Bitcoin has been around 3.18 %. While on this front, it is still higher than 30 day average of US Dollar which is around 1-1.5%. It is still lower than major currencies in the world, especially those facing devaluation whose volatility measure typically around 25-30%.

While the price of Bitcoin is impossible to predict impeccably, with the mining reward halving in June of 2016, record highs have been predicted. This is because the supply of new bitcoin would be reduced by 50% pushing up the demand.  Few technical factors indicate that primarily, the highs of 2013 ($1,100) would be tested in 2016. If the sentiment persists, a speed rise to $4,400 can be expected.

Hence as compared to the previous years, Bitcoin had an excellent run in 2015 and has carried it deep into the 2016, standing good on all expectations.